Getting Older...but when do I get wiser?

The clock is ticking....

Picture it. It's Friday night. Joe and I have been cozying in, cooking dinner with my dad and watching hours upon hours of "Dexter" with countless glasses of Scotch and wine in our hands, respectively. Not a bad evening, eh? Dad starts nodding off in the recliner, the fire has died down to glowing embers, and the evening is wrapping up.

Thankfully Joe has not overimbibed, because I can feel the beast within, roaring for Whataburger breakfast tacos. It is very rarely--precisely two times a year--that Joe and I indulge in late-night, drunken fast food gluttony, and I can feel the urge coming on. I have consumed nearly a bottle of wine, and as soon as my father leaves our home, I turn towards my husband.

"You know what time it is," I slur through wine-purpled lips, swaying in what I perceive to be a sexy manner.

"No, stooooopid, Taco time!" I chortle sloppily, expecting a round of applause for coming up with such an amazing plan.

"Uh, really?" Joe does not look excited, but because this is a biannual event, we put on our shoes and coats over our pjs and drive around the corner to Whataburger. I was so excited.

We pull up to the drive-through and yell to the speaker box that we want four sausage egg and cheese tacos, pronto! Only to hear the lady on the other end laugh, "Aw now, y'all know it's too early for late night breakfast! We don't even serve until 11 p.m."

I mean, the signs have been here. Between my gimpy arthritis-riddled finger, the general aches and pains of moving in the morning, and the fact that I've pulled three snow-white hairs out just this week are telling enough signs. Poor Joe ended up at a doctor's office last week, convinced his ankle was fractured in some sneaky way only to find out he has chronic tendonitis.

Don't "chronic" problems only happen to old people and hypochondriacs? Apparently not. Now it's us. Those commercials featuring older people walking pain-free up hills with their dogs, and woman clutching their chests and wincing with heartburn are apparently targeted towards us.

And, yet, the time had to come sooner or later. I just thought we'd be grandparents by the time these things happened. Or at least parents.

And then I had to think about it. We've been running on a slower schedule than many--we married at a later age than some, we've held off on having children in favor of gaining more financial security. Maybe it's not just about getting older--maybe for us, it's just been about growing up. Along with our aches and pains, our waiting and longing for life's joys and mysteries, we've gained some solid footing we wouldn't have had at 25. At least, I know I wasn't ready for a lot of things ten years ago that I truly thought I was.

I waited a long time to find someone to grow old with, and I really lucked out with Joe. Trust me, I could write a book about what's out there in the dating world--and it ain't pretty.

A close friend of mine who is swimming out there in that pool told me very recently, "I want someone who is already fully formed. I don't want to have to wait for them to grow up--I want him to know who he is before I meet him." The cool thing about finding someone after 30 is that that is exactly what you get. Waiting for someone to grow up enough to be in a relationship is such a pain in the neck. The flipside? We now literally deal with each other's pains in the necks. And backs. Oh, and ankles. And fingers.

And we love each other all the more for it. Every day.
Posted by Reagan at 2:23 PM 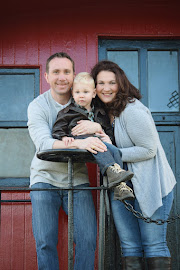